Bringing Beauty to the World, One Gift at a Time

Gifts from Dr. Carol Prahinski and Flemming Mathiasen to support students and the community in multiple areas 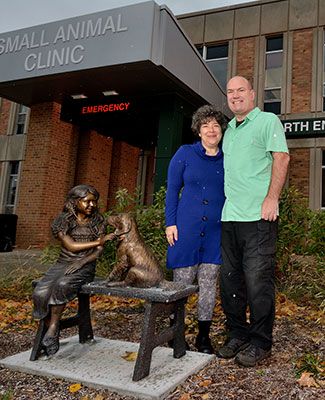 Bringing Beauty to the World, One Gift at a Time

Gifts from Dr. Carol Prahinski and Flemming Mathiasen to support students and the community in multiple areas

The story begins on a snowy winter night in 2009.

“I heard a cat insistently meowing and I thought it was our black cat Toby, who should have been on our screened-in back porch,” says Carol Prahinski, assistant professor of supply chain management in MSU’s Broad College of Business. “But the meowing was at the front door. I wondered how Toby had escaped. I opened the door and picked him up. He was meowing like crazy—which was unusual for Toby.”

At the same time, Carol’s boyfriend, and future husband, Flemming Mathiasen, opened the back door and Toby darts in. “He runs into the living room and stops dead in his tracks when he sees a black cat in Carol’s arms,” Flemming says.

That’s how Plato came to join the Prahinski and Mathiasen household.

Fast forward to spring 2020. “Plato was lethargic; he didn’t seem right,” says Flemming. It was early in the COVID pandemic and the MSU vet clinic offered curbside service only.

The Possibilities of This Day

“We were sitting in our car, waiting for a diagnosis, and we were having a difficult time. We knew there was something seriously wrong with our kitty and we couldn’t be with him,” Flemming says. There was nothing for them to focus on, other than the cold concrete of the parking lot and the barren look of the vet clinic landscaping—or lack thereof.

“We had been thinking about investing money in MSU gardens,” Carol says. “But we didn’t know where that would be—until that moment. We saw a huge opportunity on the north side of the vet clinic building,” she says. “We decided to make that our project. It was a blank slate.”

“We wanted to beautify the area,” says Flemming, who earned his Master Gardener distinction through MSU’s Extension program in 2014.

Unfortunately, Plato’s diagnosis that day was a large mass in his abdomen. He survived four weeks on palliative care and died peacefully at home on May 26, 2020.

While thinking of their beloved Plato and their passion for gardens, they established the Flemming R. Mathiasen Garden with a cash gift and endowment at the College of Veterinary Garden to create and ensure its upkeep.

The garden contains a variety of pet-friendly plants, a bronze statue of a little girl with a stethoscope listening to a dog’s heart, and three benches, one of which features an inspiring quote by Flemming R. Mathiasen: “I rejoice at the possibilities of this day.”

Providing Roots for the Next Generation

The couple’s generosity does not stop there.

There is the Prahinski Endowed Scholarship with an estate gift to support approximately seven students each year. The full-ride scholarships will support FAME students—the Fostering Academics, Mentoring Excellence (FAME) program at MSU, which is a resource center for students who were in foster care, kinship care, have experienced homelessness, or are otherwise independent. The scholarships will also cover Education Abroad expenses and include a laptop for each recipient.

“When a first-generation student goes to college, so much is foreign to them,” Carol says. “They don’t have a family member who can share their own college experiences with them.”

“I really love the idea that we are able to support international travel, so students can learn more about the world around them,” she adds.

“We want students to not just be able to learn, but to broaden their horizons,” Flemming added.

“Even if the students don’t get top grades, we will support them in their learning process,” Carol says. “If they find out they are in the wrong major, we encourage them to change majors.”

An additional estate gift established the Red Lion Endowment at MSU’s Wharton Center for the Performing Arts. It was named after the Red Lion Theater—the first indoor stage in the world, in London, England, which reflected a dramatic shift in the process and innovation of theater production.

The endowment will support an artist-in-residence—an individual who works on campus for a set period and supports initiatives occurring at the Wharton Center. They are original concepts with colleges across campus.

“In addition to supporting an artist-in-residence, our endowment exposes young people to the Wharton Center, and to the arts in general,” Flemming says.

Sharing the Harvest of a Successful Life

In their estate planning, Carol and Flemming also established a gift to support the Bea and Roy Mott Fund for the student food bank.

“We wanted to support the student food bank for a reason similar to the student scholarships,” Carol says. “A student won't learn well when they are hungry. I didn't want them worried about food during their studies. Also, there are too many hungry students, spouses, and children on campus.”

“After Plato died, we were without cats for a couple of months,” Carol says. “Our first cat, Toby, was euthanized at the vet clinic in 2014.  Since we missed having cats in our lives, we went to a local shelter and found two senior kitties that we wanted to adopt—Sheba and (coincidentally) a cat named Toby—who came into the shelter together.”

Through their generosity with these many gifts and endowments, generations of people and pets are sure to find as welcoming and beautiful a home at MSU as Toby and Sheba have found with Carol and Flemming.

To learn more about how to make a gift through your estate plans, contact Senior Director of Gift Planning Deanna Gast in the Office of Gift Planning at gastd@msu.edu, or call (517) 884-1071.