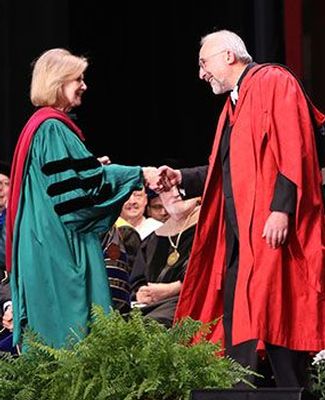 As the pioneer land grant institution, Michigan State was responsible for shaping a new idea— for a type of university that had never existed before. It had to be invented as we went along. So we had to ask: What broad challenges exist in the world? How can education help empower people to address them? And how can we prepare the next generation to do the same?

It is a truth universally acknowledged—that a university tasked with tackling those challenges needs excellent teachers and researchers to do so. And the best way to attract them is with privately funded endowed chair and professor positions.

MSU’s quest to secure 100 new endowed faculty positions—and the ways in which our teaching and research landscape would evolve once we did—was a top priority during the recently concluded Empower Extraordinary campaign.

By the campaign’s end on December 31, 2018, 112 new endowed faculty positions were funded, the impact of which is shaping a bold new future for what a land grant university can do.

In recent years, MSU has earned a spot among a group of 53 “international powerhouse universities,” identified by Times Higher Education as institutions with exceptional research output, that have the best chance of catching up with or overtaking the world’s best universities.

MSU’s scale and scope—which goes so far beyond the friendly confines of East Lansing—and determination to pull together leaders from multiple areas of expertise are surely contributing factors.

Of course, an enormous increase in private funding for research—35%, or an additional $340 million, thanks to gifts made during Empower Extraordinary—factors in, too.

Without standout researchers who are leading the charge in their fields, MSU wouldn’t have a research output—let alone one capable of catching up to some of the best in the world. Those teachers and researchers are able to do the great work they’re doing because donors choose to invest in MSU by creating endowments that give them limitless possibilities.

And, at the center of it all, is the teaching aspect. Not every student will go on to imitate the distinguished research careers of the faculty who teach their classes, but every student deserves to learn from them. As an institution that has been recognized by Kiplingers, Money and others as being among the top 50 institutions for a high-quality education at an affordable price, MSU understands the importance of putting the very best teachers in front of the more than 45,000 people—from all walks of life and all corners of the state, country and world—who seek an education here each year.

By the campaign’s end on December 31, 2018, 112 new endowed faculty positions were funded, the impact of which is felt in colleges and units across the campus.

Donors like you created the first named professorship in the College of Nursing, and then created two more in the college. You also established the first endowed positions in MSU Libraries and the MSU Museum, and the university’s first endowed coaching position: the Secchia Family Defensive Coordinator for the football program.

Additionally, donors created the largest number of new positions in the College of Engineering (21), the Eli Broad College of Business (16) and the College of Natural Science (16).

Thanks to donors, 10 endowed positions were established in the College of Arts and Letters, while the colleges of Veterinary Medicine and Human Medicine each added eight. Donors added six endowed faculty positions to the college of Communication Arts and Sciences, and five each to the colleges of Agriculture and Natural Resources and of Social Science. Additional areas where donors supported endowed positions include Education (3), Law (2), Music (2), and Lyman Briggs College (1).

Jim and Kathy Cornelius established a $5 million lead trust to support areas deemed by the president to be of the greatest need. As a result, MSU opted to create three endowed positions to be used at the university level to recruit outstanding faculty who bring great promise through their academic and research endeavors. Christopher Contag, the inaugural James and Kathleen Cornelius Chair in Biomedical Engineering, has often expressed that he left his “dream job” at Stanford to pursue big, world-changing research questions at Michigan State. He’s a faculty member to watch (see pages 15-19).

In addition to endowed positions, MSU also strengthened the faculty through the Global Impact Initiative. Launched in 2015, the initiative aimed to hire 100 faculty investigators in promising new areas of research. Research teams from all over campus provided input on the areas they thought could benefit from additional brainpower, and since then, 85 new faculty members have come aboard and gotten right to work.

Providing outstanding faculty members with funding to continue their great work is one of the best ways to amplify their achievements. Donor-funded endowed positions provide money for their pursuits in perpetuity, but Michigan State has also created university-level distinctions that come with honorific titles and a yearly stipend.

Endowed chairs are faculty members with significant experience and accomplishment in their fields, who in their careers have built a network of collaborators and a robust research portfolio. Private funding gives them the resources they need to further their work, publish their findings, travel to conferences and even create opportunities for promising students to gain real-life research experience. Their work helps MSU remain a competitive force among other universities and research institutions on a global scale. Endowed chair positions are created through donor support and are funded in perpetuity.

Endowed professors are leaders in both the classroom and in their respective fields and have a growing body of research. Resources help them fund and further their research, build a network of collaborators, and deliver top-notch classroom and laboratory experiences around the topics in which they specialize. Endowed Professor positions are created through donor support and are funded in perpetuity

The title of University Distinguished Professor is awarded by the MSU Board of Trustees at the recommendation of the provost and president, to select faculty members who are nationally and, generally, internationally recognized for the importance of their achievements. Awardees have superior teaching skills that encompass the breadth and depth of their discipline; scholarly, creative and artistic achievements; and a distinguished record of public service. The title of University Distinguished Professor is permanent for the duration of a recipient’s service at MSU and includes a yearly stipend for five years to support professional activities.

Established in 2014 by the MSU Foundation, the title of MSU Foundation Professor is awarded to exceptionally accomplished faculty members, current and incoming, who are recommended for the honor by their deans. These talented researchers are leaders in their disciplines, advancing specific areas of scholarly need, disciplinary development, research or creative emphasis at MSU. Awardees retain the title of MSU Foundation Professor for the duration of their service at MSU and typically receive scholarly support for five years after receiving the award.

The John A. Hannah Distinguished Professorship was first announced in 1966, in honor of Dr. Hannah’s 25th year as president of Michigan State University. Hannah was an ambitious, insightful and caring leader, whose commitment to the true mission of a land-grant university brought MSU into worldwide prominence. John A. Hannah distinguished professors, much like Hannah himself, are educators who, through their research, scholarship, creative activity and teaching, are helping to strengthen their disciplines and reinforce MSU’s ability to solve global problems.

These endowed chairs and professors wouldn’t be here without people like you: people whose lives were impacted—directly or indirectly—by something positive that happened at Michigan State. For the Tung family, that something just happened be the life’s work of their patriarch, Dr. Wu-Ki Tung.

Dr. Tung retired in 2007 and passed shortly after in 2009. After his passing, his family—wife Beatrice, sons Lei and Bruce, daughter-in-law Cecilia and grandchildren Max and Allie—could think of no better way to honor his legacy than by creating an endowed professorship in his name.

During Tung’s 25-year tenure from 1992 to 2007, he always maintained that Michigan State felt like his true spiritual and academic home. He loved his work in particle physics, which was based on a now globally known theory he’d created himself called CTEQ—Coordinated Theoretical Experimental Project on Quantum Chromodynamics. And for as much as he loved his work, he also loved the environment in which he was able to do his work.

“One thing my father believed strongly in, and advocated for ardently throughout his career, was collaboration. He also practiced it in life,” Wu-Ki’s son Lei recalls.

“He wanted theoreticians and experimentalists in the physics community to work closely together, side by side, rather than just throwing theories and experimental results over the wall to each other in the form of formal publications.

“Therefore, in the charter for the endowed professorship in his name, it was important for us to write down our desire that—in addition to continued research in particle physics—prominent consideration be given to promotion of ‘collaboration and collegiality’ in granting the award.”

Chien-Peng (C.P.) Yuan was named the inaugural Wu-Ki Tung Professor in 2017. Yuan is a prominent member of CTEQ and worked closely with Wu-Ki Tung for many years.

The inaugural MSU investiture ceremony emerged from one simple concept: the need to recognize accomplishments of newly appointed endowed and honored faculty members at a university level.

A donor would speak about the experience of making a gift to create an endowed professorship. An endowed professor would speak about how the promise of support lured her to Michigan State to pursue her life’s work. And 42 faculty members would cross the stage in academic regalia to receive medals before an audience of fellow faculty, deans, university administrators and staff, and donors.

As an annual event, the investiture would help Michigan State keep a steady dialogue going about the importance of private support for faculty positions, especially during the Empower Extraordinary campaign.

All of those things did actually happen on October 28, 2016. But behind the scenes, the investiture took on another, unexpected purpose: It became an opportunity for faculty members from across campus to meet one another face-to-face, forge friendships and learn more about what’s happening in classrooms and labs outside of their current work.

With Empower Extraordinary behind us, the Investiture will continue to serve as a yearly reminder of our ongoing need to secure funding for research and education in critical areas—and a yearly celebration of what can happen when we do.

LEARN MORE about endowed chairs, endowed professors, and other distinguished faculty members at MSU by visiting the Honored Faculty website, where you can search by name, title, or college for a veritable who’s who of our very best teachers and researchers.