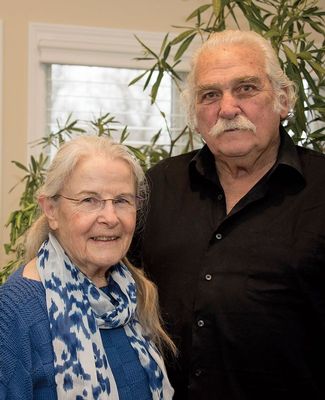 When Bill and Yvonne Lockwood created an Endowed Romani/Gypsy Librarian position at MSU, they knew it was an important step in establishing MSU as a prominent site for Romani/Gypsy Studies.

Before they were married, Bill and Yvonne had shared interests in cultural anthropology, folklore, foodways, and the people known as Roma, or Gypsies. Their relationship with the Roma began in Central California in the late 1950s when they attended several extravagant slava celebrations with the Roma. These celebrations included vast tables of whole roasted pigs, hanging fruits, and large chunks of bread, along with spirited live music and dancing.

They were fascinated with the Roma community and were dedicated to collecting everything they could on Gypsy history and culture, especially on the subject of Gypsy stereotypes. At the same time, they were also collecting materials on national, ethnic, and regional foodways. Both of their careers provided opportunities to travel frequently and purchase materials for their collections.

“When we’d go to a conference, in say, Romania, we’d schedule a week or two weeks extra to travel around the country,” recalls Bill. “All my colleagues would go home, and I’d still be there trooping around the city and countryside, visiting bookstores.”

After decades spent building their collections on foodways and Gypsy culture, they decided to donate the materials and artifacts to MSU, making them accessible to researchers specializing in Roma. They also established endowments for Special Collections and the MSU Museum to acquire new materials, provide conservation, and support digitization of the collections.

“We’re leaving a legacy for a future generation,” Yvonne explains. “We’re hoping that our donation will, in fact, strengthen Roma studies. As far as I know, there’s nothing quite like that in the United States.”