You CAN Go Home Again

The Ayers-Willert Scholarship has awarded more than $2.2M in scholarship support since 1996, making it possible for 65 students (and counting) from Dundee High School to attend Michigan State. 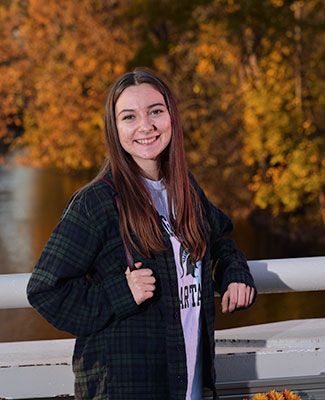 You CAN Go Home Again

The Ayers-Willert Scholarship has awarded more than $2.2M in scholarship support since 1996, making it possible for 65 students (and counting) from Dundee High School to attend Michigan State.

Frank Ayers, the former superintendent of public schools in Dundee, Michigan, knew his community well and took an interest in every student. So it was based on solid knowledge when he suggested to lifelong farmer Harry Willert that Willert’s son, Bill, would be an excellent candidate for the Michigan State College of Agriculture and Applied Science.

The superintendent might not have been able to know how much of an impact his encouragement would have on future generations of Dundee students, but he was spot on about Bill.

With the school’s support and financial backing of his family, Bill earned his degree in chemical engineering and became an early pioneer in plastics. His expertise and enthusiasm soon took him to a job on the East Coast, where he met and married his wife Eleanor.

He devoted long hours to his work, including late nights spent at the couple’s kitchen table. He might not have yelled out “Eureka!” the night he put the last piece in place to create his model of a reciprocating screw for plastic forming, but his triumph certainly would have justified it. His invention transformed the industry and secured his place in the Plastics Hall of Fame forever.

“It opened a whole new world in plastics,” Eleanor recalls. “With it, they could make anything they wanted out of plastic.”

Engineering and plastics continued to intensely captivate Bill’s imagination and energy until his death. He patented numerous inventions while also consulting, traveling and working with companies throughout the world for decades. “Lots of companies had questions,” Eleanor says. “Bill always had the answers to their problems.”

Bill also tended to his roots in Michigan, often visiting the family farm in Dundee and keeping up on the latest and greatest agricultural outreach from MSU. One of the couple’s three daughters followed in her father’s footsteps to become a Spartan as well.

His legacy in Michigan became permanent when the couple made a $1 million gift in 1995 to establish the William H. and Eleanor E. Willert Endowed Scholarship in Memory of Frank M. Ayers and Harry W. Willert. The awards go to Dundee High School graduates and are based on a combination of financial need, academic success, service and leadership.

The scholarship fund helped its first student in 1996. Since then, 65 Dundee students have become Spartans thanks to Bill and Eleanor’s generosity. The annual scholarship amounts vary based on need and the number of students but can be as large as providing nearly full tuition, room and board. Over the past 26 years, the fund has awarded more than $2,229,235 in support for students.

MSU junior Cassandra Stoner (pictured above) is one of the current, and very grateful, scholarship recipients. Back in high school, MSU was her top choice, but because of financing becoming a Spartan seemed out of her reach. She resigned herself to “Plan B” and was applying to smaller institutions near home, while still counting down the days to when decisions would be made on the Ayers-Willert scholarship. So when her dad brought in the mail that day and said there was a letter for her from MSU, she asked him to open it and held her breath.

“It was the happiest moment of my life,” she says. “The Willerts’ scholarship means everything to me because without it I couldn’t have come to MSU. That gave me so many opportunities and opened so many doors. I can’t imagine not being a Spartan.”

Cassandra, who majors in communication, is the first in her family to go to a four-year institution. She hopes to travel the world after graduation but knows that Michigan will always be home for her.

Sounds like something Frank Ayers and Harry, Bill and Eleanor Willert would relate to.

LEARN MORE about scholarship support for students by contacting the Advancement Office in your college or unit, or Senior Director of Development for Scholarships and Fellowships Jennifer Bertram at bertram9@msu.edu or by calling (517) 432-7330.