A $1.3M research project will use laser light to record movies of biological processes at an unprecedented resolution 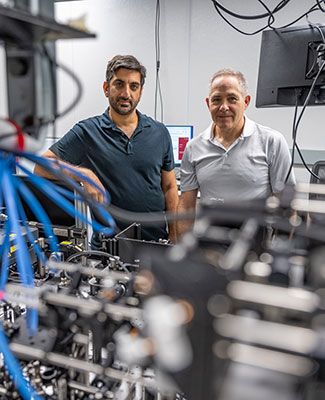 A $1.3M research project will use laser light to record movies of biological processes at an unprecedented resolution

The W. M. Keck Foundation has awarded Michigan State University’s Marcos Dantus and Elad Harel $1.3 million to start a new revolution in the way we use optical microscopes to understand the living world.

To date, the foundation has announced 13 philanthropic research awards in 2022. Seven are supported by the Keck Foundation’s Medical Research Program and six, including MSU’s, were awarded by the Science and Engineering Program. This also marks the first time that scientists at MSU have claimed the award.

“This gives us a tremendous opportunity,” said Dantus, an MSU Foundation Professor and a University Distinguished Professor of chemistry in the College of Natural Science. “It’s really special.”

“It’s the dream scenario,” said Harel, an associate professor in the Department of Chemistry. “Grants like these don’t come around very often, and when they do, they allow you to be your most creative self."

Harel’s and Dantus’ research will push the limits on what light-based or optical microscopes can see, which would bring benefits to a range of scientific and engineering fields. But the new approach is poised to deliver the greatest impact to our understanding of health and disease by revealing what life looks like, in motion, at the scale of proteins and DNA molecules.

“Below a certain point, what we know is based on static pictures and simulations,” said Dantus. “There are parts of the machinery of life that are hidden by size and timescale. That’s what we’re trying to make available.”

The new technology would also be able to record movies of biological processes with a high frame rate. That means researchers could record things like viruses assembling and proteins doing their chores inside cells, then watch replays in slow motion to better understand what’s happening and how.

“Going from our eyes to the first microscope — that opened up a whole new world people hadn’t seen before,” said Harel. “That’s the kind of change we’re going for.”

The Keck Foundation encourages creativity by rewarding transformative projects that traditional funding agencies might see as too ambitious or risky.

“By funding the high-risk/high-impact work of leading researchers, we are laying the groundwork for new paradigms, technologies and discoveries that will save lives, provide innovative solutions and add to our understanding of the world,” the foundation states on its website.

Developing a proposal that threaded the needle of risk and reward was a challenge, but Harel and Dantus had help. Previous applicants at Michigan State shared insights from their experiences to help hone the duo’s current submission. MSU is also now home to researchers who have won the award at different institutions, and who offered guidance.

“Michigan State University is proud to have the excellent research of Dr. Harel and Dr. Dantus recognized at the national level,” said MSU Provost Teresa K. Woodruff, Ph.D., a 2013 Keck Foundation award recipient. “Their innovative project represents the kind of creative and transformative research that characterizes MSU, with broad application to benefit the greater good.”

The investigators worked closely with University Advancement to engage with the Keck Foundation and with the Office of Research and Innovation to perfect their proposal. This collaboration is essential as MSU looks to increase philanthropic support for research.

“The university was extremely supportive,” said Dantus. “We had lots of conversations, and we got lots of advice. That support and excitement were really important.”

“It goes all the way from the department to the highest level of the university,” Harel said. “It feels like we’re one team, and it makes me feel good that we have the institution behind us.”

That support will continue as Harel and Dantus now take on the challenge of delivering what they’ve proposed. They’re inventing a laser-based system that can sidestep a fundamental limitation of optical microscopy to record living systems as never before.

Push it to the limit

When using light to magnify the invisibly small world, researchers inevitably run up against a barrier imposed by physics. When a beam of light strikes a sufficiently small object or opening, the beam spreads out and loses its resolving power.

Over time, scientists have developed Nobel Prize-winning technology that confronts this limitation to see smaller and smaller things, but there are always trade-offs. Take electron microscopy, which uses electrons instead of light to take snapshots with nearly atomic resolution.

“Electron microscopy is really the only way to get down to the nanometer scale, to the size of proteins in biology,” Dantus said. “Our challenge from the beginning has been to convince people that our approach has the potential to reach that resolution.”

But electrons can damage cells and their contents, so imaging biological samples requires special preparation that removes them from their natural environments. For this reason, electron microscopy can’t be used to visualize biological processes as they happen.

By using light, Harel and Dantus keep that possibility alive. But to succeed, they’ll need to find a way around the diffraction limit, the problem that causes light to spread out in space. To this end, the researchers had an idea: If the limitation is in space, why don’t we make measurements in time, which we can do with incredible resolution, unrestrained by diffraction?

To make those measurements, they’ll use lasers that can send out 80 million pulses of light per second, with each pulse lasting about 10 quadrillionths of a second. By measuring and analyzing when certain parts of the pulses strike certain parts of a sample, the researchers believe they can show what the sample looks like — again, with unprecedented resolution, and unimpeded by the diffraction limit.

If this sounds a little out there, remember, that’s the goal. But this approach also draws inspiration from something used every day in the real world: magnetic resonance imaging scans, or MRIs. Although they don’t use light, MRIs rely on similar thinking to reveal living biology at a level that once seemed “too small” for their magnets and radio waves.

The Michigan State researchers are hoping that one day their new idea will join the ranks of MRIs and other imaging technologies that are so common, they’re almost taken for granted. It’s a lofty goal, and history has shown that reaching it will take years of research, development and teamwork. But Dantus and Harel are looking forward to the journey, and they’re proud to be taking the first ambitious step with the philanthropic support of the W. M. Keck Foundation.

“The really exciting part for me is the collaborations that we could form with experts in different areas, asking, ‘Now that I have this ability to zoom in, what can I do with it?’” Harel said. “If we can show our idea can solve real problems, we give people something to build off of, drive further and help develop to its full potential.”