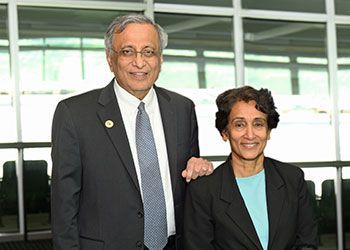 A gift valued at $1,001,000 from Acting President Satish Udpa and his wife, Lalita Udpa, a professor of electrical and computer engineering, will benefit College of Engineering students.

Several years ago the Udpas created endowments to honor their parents—Vasanthi and S. Ramamohan Udpa, and Janaki and S.V. Srinivasan.

“They were our first teachers and mentors and the first to introduce the notion that knowledge is valuable for its own sake,” Satish Udpa says. “Throughout the years, their belief in lifelong education never flagged.”

Lalita Udpa notes that “their selfless commitment to education and their insistence on doing one’s duty greatly influenced the character of their children and grandchildren.”

Engineering Dean Leo Kempel says the college is “extremely grateful for the contributions by both Satish and Lalita to the college—their leadership and service, conscientious education of our students and for their financial support. Dedicated faculty such as Lalita and Satish are part of the core fabric of the college, part of what makes Spartan engineers exceptional,” Kempel adds.

Both Udpas work in the area of Nondestructive Evaluation (NDE).

He has published extensively, is a fellow of four academic societies, holds several patents and serves as editor of several journals.

Lalita Udpa is a University Distinguished Professor in the Department of Electrical and Computer Engineering. She was one of only nine women in the country featured in a 2018 story on “Women in NDT” in Materials Evaluation, the scientific journal of the American Society for Nondestructive Testing. Her MSU awards include the William J. Beal Outstanding Faculty Award and the Ralph H. Smuckler Award for Advancing International Studies and Programs.

There’s meaning behind the specified amount of their gift, says Stephen Bates, senior director of development for the College of Engineering.

“As we were finalizing the documents, Satish kept quoting a number that was a bit higher than what we had agreed,” Bates says. “I didn’t want to seem ungrateful, and I didn’t want to question his mathematical skills, but I needed to get this right. I asked him about the discrepancy, and he informed me of an Indian tradition to always give more than you were asked for, thus the extra $1,000 in the gift.”

To create the gift, the Udpas signed a retained life estate agreement and a bequest during MSU’s Empower Extraordinary campaign that closed in December 2018 and raised $1.83 billion.

The arrangement transfers ownership of their home to MSU but allows them to continue living in the home through their lifetimes, while remaining responsible for upkeep and expenses. MSU then sells the property and invests in the endowed accounts as a provision of the estate plan.

“This is just one of the many creative ways that donors support MSU,” says MSU Office of Gift Planning Senior Director Deanna Gast. “That the Udpas found this way to pass on their values and make an investment in future students will have a lasting effect on generations to come.”