You Had a Really Green Day 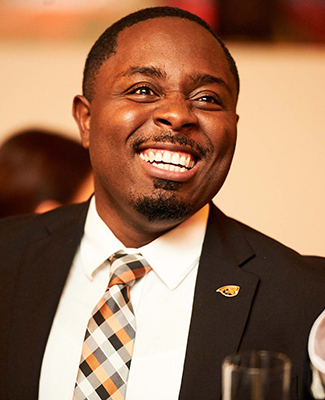 You Had a Really Green Day

He spent summers at MSU as a high schooler. He lived in the residence halls. He attended Upward Bound programming in Bessey Hall. He got to know the maze of campus buildings and sidewalks. So when it came time to apply for college, everything about MSU felt right. It was affordable. He felt welcomed and supported. And, most importantly, campus already felt like home.

More than a decade later, having moved out of state and devoted his career to an entirely different university (Tyrell works for the Oregon State University Foundation), MSU still feels like home, and it’s one of the reasons he feels so strongly about giving back.

He makes regular gifts to MSU initiatives for high school students and his college, Communication Arts and Sciences, to support their ongoing needs, but he also likes to “spread the love” to other causes. He saw Give Green Day last year as a perfect opportunity.

On that day, he chose several different causes to support, each one an important part of making students and Spartans from every walk of life feel supported, included, and connected. His gifts helped bolster the Dr. Robert L. Green Scholarship Fund through the MSU Black Alumni Club, the MSU Museum Summer Institute, and the Spartan Fund.

Aside from the general good vibes that come with giving to the things he cares about, Tyrell got an extra dose of Spartan Pride from Give Green Day—which was welcome, considering that he was participating from 2,400 miles away.

“Give Green Day fosters a real feeling of community,” Tyrell says. “Everyone was united by a common goal and a common purpose, and it made you want to participate. Being a part of it felt just as important as the actual act of making a gift.”