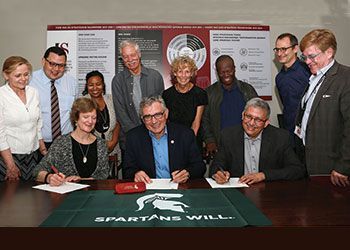 Michigan State University has a long history of involvement in South Africa, dating back to the era of apartheid when MSU became the first major public university in the US to totally divest from its South African portfolio in 1978.  Following the advent of democracy in 1994, MSU established new partnerships with universities and other institutions in South Africa to support the transition.  Today, this legacy of partnership continues as Michigan State’s African Studies Center and South Africa’s Stellenbosch University Museum have received an investment of $800,000 from The Andrew W. Mellon Foundation to deepen an existing initiative, the Ubuntu Dialogues.

Support from the foundation will allow the two universities to bring together scholars, students and museum professionals from the United States and South Africa over a three-year period to break down barriers, build trust among communities, and encourage constructive dialogue.

The Ubuntu Dialogues project began two years ago with seed funding from MSU’s Alliance for African Partnership. “What is unique about this project is that the agenda is set by our South African partners, and we are bringing our rich knowledge and expertise gained from years of partnerships to support our mutual goals,” says Dr. Jamie Monson, the Director of Michigan State University’s African Studies Center.

In addition, museums in South Africa have long been regarded as deeply compromised colonial institutions, in which low-income persons of color are invariably relegated to subordinate subject positions. Yet, at their best moments, museums can emerge as vital arenas of transformative dialogue, mutual discovery and debate, and in doing so actively create a visible tableau of interdependent human community, the very essence of “Ubuntu.”  This has been the approach taken by the Stellenbosch University Museum under the leadership of its current director, Bongani Mgijima.

“The premise of this project is that museums can accommodate both curation of art and creation of ideas,” notes Dr. Monson, to serve as dynamic and digital crossroads and contact zones within which diverse people and communities from around the world can engage on equal footing to discuss common issues facing them across the continents. Dr. Monson pointed to U.S. movements to address pressing issues such as Black Lives Matter, while in South Africa students have formed movements such as Fees Must Fall. The Ubuntu Dialogues project will allow young people from both countries to share different perspectives and strategies related to these challenges. In addition to the discussions, there will be virtual and in-person seminars, an exchange program and graduate fellowships to encourage the sharing of ideas and the development of a professional pipeline for individuals who have traditionally been underrepresented in museum leadership positions.