Launching Spartans from East Lansing to New York and Beyond

"Michigan State is doing great things in sustainability and many other areas. For students to be able to see projects in New York City, Rome, or Paris will further their education in such a great way.” 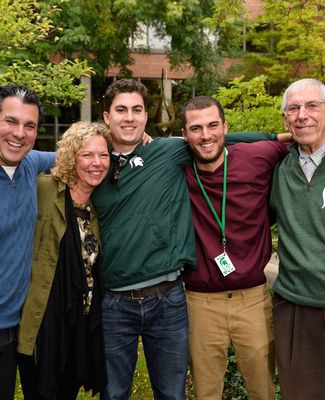 Launching Spartans from East Lansing to New York and Beyond

"Michigan State is doing great things in sustainability and many other areas. For students to be able to see projects in New York City, Rome, or Paris will further their education in such a great way.”

There is a lot to distinguish Peter G. Riguardi and his wife, Linda.

For one, as the chairman and president for the New York operations of one of the world’s largest commercial real estate brokers, Jones Lang LaSalle, Peter has brokered some of the largest and most complex leasing transactions in the city’s history.

For another, he and Linda have been together since they met in high school and have successfully raised four sons, each of whom followed in his parents’ footsteps to pursue higher education. Their sons’ schools of choice were largely small, New England–located private Christian colleges, much like Marymount College, where Linda, an educator, was the class valedictorian. Or Iona College, where Peter, a distinguished alumnus, has served on the Board of Trustees.

Surely the couple never foresaw one day holding a new distinction at a large Midwestern-located public university. But that was before their youngest son, Alex, decided to break with family tradition and attend Michigan State.

Alex is now enjoying his junior year. His parents are enjoying a new way to show their commitment to higher education.

Recently, Peter and Linda made a $1 million gift to create the Peter G. and Linda Riguardi Experiential Learning Fund for Domestic and International Site Evaluation Experiences. It is one of the largest gifts ever given to MSU from non-alumni parents of a current student. The fund will enable students in the School of Planning Design and Construction to gain firsthand knowledge of major urban planning projects through site visits around the world.

“The more you travel, the more you see beautiful architecture. Michigan State is doing great things in sustainability and many other areas. For students to be able to see projects in New York City, Rome, or Paris will further their education in such a great way,” says Linda.

Peter, who is no stranger to being up close to large urban planning projects and also is a converted Spartan sports fan, adds: “Much like the coaches at MSU, the university as a whole has great leadership, and it is clear they are building something that is bigger than just one season. We are glad to be able to help.”

And Alex? He’s busy making the most of his MSU opportunity. First, he’s an urban and regional planning major. But, just as importantly, he started a business with two MSU friends. The business is called Driver on Tap. It’s an app that allows users to hire a driver to take them, and their vehicles, safely home. It has been quickly picking up steam in East Lansing and several other cities.

“I’m really happy about the unexpected opportunities I’ve had throughout my time at MSU,” Alex says. “Someone I met in my dorm becomes a good friend and business partner. It really opens up the world.”

Thanks to the generosity of the Riguardis, future Spartans will have some new unexpected, world-opening opportunities as well.

For more information on making a gift to the College of Agriculture and Natural Resources, contact Senior Development Officer Tami Baumann at bauman13@msu.eduor call (517) 355-0284.