A Story Worth Repeating

"We both see our philanthropy as a way of saying thank you and giving back for the great gift we received from Michigan State." 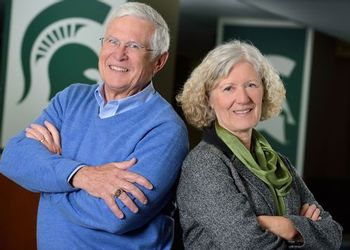 Mark (’75, Natural Science) and Sandy (’75, Education) Ehlert were students working on campus in Hubbard Hall when they met for the first time.

They married during spring break of their senior year.

He started a career in medical manufacturing. She started a science teaching career.

Today, after retiring from the busy life that took them all over the United States and beyond, the Ehlerts still haven’t forgotten where they got their start—and, though they’ve long since moved on from Hubbard Hall, they’re still working to make MSU a better place.

“We both grew up in blue collar families—Sandy is from Rochester, and I’m from Madison Heights—and we both see our philanthropy as a way of saying thank you and giving back for the great gift we received from Michigan State,” Mark says.

To honor their past, the Ehlerts chose to invest in the future. They created three endowed scholarships, each of which pays tribute to the family and faculty that made the gift of their MSU education possible.

“We’ve met some of the scholarship students,” Sandy says, “which is always a thrill. It’s nice to hear what they want to do and what they’re studying.”

Mark added, “We see our donations as a way to give the best and brightest a chance to achieve their goals.”

And who knows? Thanks to the Ehlerts, those students may have a “We met in Hubbard Hall…” story of their own to tell one day.