Scholarship fund honors veteran who dreamed of becoming a nurse 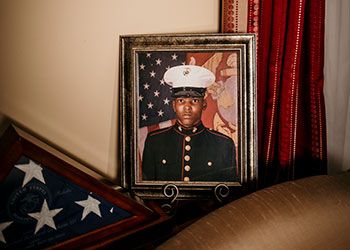 While serving as a U.S. Marine, Sgt. Leonard Bernard Graham III decided on his life path to become a Spartan Nurse and set a course to achieve it. When his life ended tragically at age 24, his parents wanted to keep his memory alive in a way that would be meaningful to him.

“Once he passed,” his father Leonard Bernard Graham Jr. recalls, “we figured that a scholarship would be the best way to preserve and honor his memory by helping others achieve their goal to become a nurse. MSU was the natural choice. Each time this scholarship is awarded, his dream continues to live.”

The scholarship fund was originally established with a planned gift by Sgt. Graham’s parents, but annual gifts from family and friends allowed scholarships to be awarded immediately. Then, a two-week “I am Sgt. Graham” campaign in 2019, raised more than $50,000. The effort was fueled by a challenge gift from Dick Wendorf, a veteran and friend of MSU who also has an endowment supporting MSU Extension’s Heroes to Hives program which trains veterans to become beekeepers. With Dick’s generosity the scholarship was fully endowed and is awarded annually to a student veteran pursuing a career in nursing.

Recipient Andrew Suzio (’21), also a U.S. Marine veteran, says the support helped fill the gaps so he could attend school full time, staying on track in an intensive program that he otherwise might not have been able to do. Speaking at a 2020 Awards banquet, Suzio expressed thanks for the support and his hope to keep the life and legacy of Sgt. Graham alive and well at Michigan State.

LEARN MORE about support for the College of Nursing by contacting Director of Development and Alumni Relations Beck Spears at spearsbe@msu.edu or by calling (517) 432-5033.