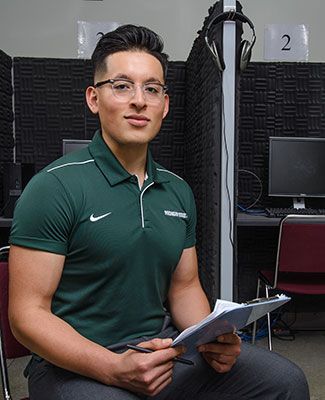 Jorge Flores Garcia is a Lyman Briggs senior from Alpena, MI studying neuroscience. As a recipient of the Wielenga Research Scholarship, he has explored the relationship between sleep, learning and memory at the Sleep and Learning Lab at MSU. He is also a member of the Honors College. In February of 2022, Jorge was one of three students to present about his MSU experience for an audience of donors, alumni and friends at Winter University in Florida. Here is Jorge’s story:

Hello everyone. I’d like to begin by thanking all of you for taking the time to attend this year’s Winter University event. My name is Jorge Flores Garcia. I am currently a fourth-year student at Michigan State University and am a member of the Lyman Briggs and Honors Colleges at the University.

This upcoming Spring, I look forward to graduating with a Bachelor of Science degree in the computational and cognitive branch of neuroscience, and I will leverage my education the following fall in medical school as I continue to pursue my dream of becoming a physician.

Although my journey at Michigan State is nearing its end, I still vividly remember my first experience in East Lansing: As a senior in high school, a close friend had invited me to visit on the weekend the Spartan football team hosted Penn State. At the time, the decision of where I would be spending the next four years of my life remained uncertain. Little did I know that it would take a mere 48 hours for me to fall in love with Michigan State.

The diversity of the student body immediately stood out and was attractive to me as someone who was born in Mexico and has moved numerous times during my life. I recognized that I could continue to learn from and collaborate alongside others different from me as I had become accustomed to doing so throughout my life.

The campus captivated me. Having spent most of my adolescent years living in northern Michigan, I developed a love for the outdoors. I admired the campus’s natural beauty, and it made the 169-mile distance from home seem virtually non-existent. The size was overwhelming, yet it excited me, as I realized the plethora of opportunities I would have as a student to explore and discover new parts of campus, similar to how I would in the northern Michigan outdoors.

Perhaps the most influential part of my visit occurred at Spartan stadium. It was not the game that dazzled however, it was the collective nature of the student body that charmed me. I admired as thousands of students sang the Spartan fight song in unison, and I even found myself high fiving and cheering alongside complete strangers in the stands as if they had been life-long friends. I realized that as a Spartan I would be more than an individual student; rather, I would be a member of a community, a family.

It quickly became clear that MSU was the perfect institution for me, and I began to envision myself sporting the iconic green and white colors as a proud Spartan. I stand here four years later, and I can confidently say that my decision to attend Michigan State University has been the wisest of my life. It is here that I’ve blossomed from a shy, reserved individual to a leader that takes pride in collaborating with and learning from others in the pursuit of excellence. It is here that I’ve connected with and developed lifelong relationships with diverse people from backgrounds vastly different from mine, allowing me to enhance my cultural competence.

Lastly, through my experiences in undergraduate research, I’ve gained an appreciation for the critical thinking skills and collaboration that go into making groundbreaking scientific discoveries that advance the existing body of knowledge and can potentially improve the lives of countless individuals around the globe.

My involvement in undergraduate research began during my very first semester of college. As an incoming freshman, I had been diagnosed with obstructive sleep apnea. As many of you may know, obstructive sleep apnea is a disorder in which the airways become narrowed during sleep, causing sufferers to repeatedly stop and start breathing throughout the night. For years, friends and family had complained of my loud, abnormal snoring but it was not until I had a sleep study done that, I discovered this disorder that not only affected the quality of my night-time sleep but also impacted my physical and mental health.

During the sleep study, I recall feeling like a robot as the doctor placed the polysomnography electrodes on my body. Nevertheless, I was fascinated by this technique and the topic of sleep.

Ironically, my curiosity kept me awake that night.

My freshman year, I was enrolled in a psychology class taught by Dr. Kimberly Fenn, the primary investigator of my lab. Dr. Fenn’s research focuses on sleep and learning, and she passionately spoke about the topics during class.

I recognized that many, including myself, were unaware of just how important this state that makes up nearly one-third of the average person’s life is. After building up the courage to approach Dr. Fenn about her work, she offered me a spot as a member of the Sleep and Learning Lab, and I gladly accepted. Now, I was the person placing the polysomnography electrodes on participants and subjecting myself to nights of sleep deprivation in the name of science.

Together, members of the Sleep and Learning lab and I primarily work to assess how sleep, or a lack thereof, may impact cognitive performance. This involves the use of techniques, like the aforementioned polysomnography, to measure sleep quantity and quality as well as the use of other tasks, such as OSPAN scripts, to assess cognitive performance.

Through our work and review of the existing literature, I came to recognize the detrimental impact that poor sleep has on cognitive performance and overall health. I realized that by advancing the body of knowledge on the topic of sleep, I could improve the health and wellbeing of individuals and entire communities. My aspiration to improve others’ lives grew into a desire to continue pursuing this intellectual passion.

As far as we know, humans are the only species to deliberately deprive themselves of sleep without any legitimate gain, and unfortunately, more than one-third of adults in the United States fail to obtain the recommended seven to nine hours of sleep per night, according to the CDC. Furthermore, insufficient sleep is now officially considered a public health epidemic by the CDC.

This is alarming, as the literature shows that there is no major organ in the body, or process within the brain, that doesn’t benefit from adequate sleep. Insufficient sleep is a key lifestyle factor that contributes to the development of Alzheimer’s disease, increases risk of cardiovascular disease, stroke, and heart failure, and contributes to the development of major psychiatric conditions, including depression, anxiety, and suicidality. Furthermore, the proper functioning of learning and memory centers is reliant on a good night’s sleep. Inadequate sleep also increases the circulating level of the hunger hormone, Ghrelin, while simultaneously decreasing the levels of leptin, a hormone that signals satiety, and is one of the culprits behind the ongoing obesity epidemic in the United States. Concerningly, these are only a handful of serious health conditions that are aggravated by poor sleep.

Perhaps it is time to rid ourselves of the old maxim saying, “I’ll sleep when I’m dead,” if we, as a society, want to live longer, healthier lives. Modern society, with its early school and work start times amongst other factors, does not favor, or consider the sleep schedules of the individuals within it. We must do better to bring this issue that impacts the lives of millions, perhaps billions of individuals around the world, to light. I beg you to ask yourself when the last time you got more than 8 hours of sleep was, and if you can’t think of when, please do yourself a favor and turn your alarm clock off tonight.

At this time, I would like to thank all the generous donors who support and positively impact students like me. Without the support of support of Dr. Thomas Wielenga and his wife, Sue, who helped establish the Wielenga Scholars Program, I would not have had the financial stability to delve into the world of research and succeed academically to the extent that I have. I can confidently say that through their generosity, the Wielengas have enabled me to realize my true academic and professional potential and have reinforced my belief that one day I could have a similar, positive impact on others’ lives through medicine. Without the contributions of the Wielengas and other donors, the academic and personal growth of many students would be stunted.

Once again, thank you for your time and hospitality, and thank you to all the donors, faculty, and friends of the university whose contributions are integral to providing past, current, and future Spartans with the experience that is customary of our beloved institution. As always Go Green!

Read on for Alyssa Fritz’s and Mariam Sayed’s Winter University presentations. Also, hear from Dr. Thomas Wielenga on what supporting students has meant to him.

LEARN MORE about support for students by contacting the Advancement Office in your college, unit or region, or by contacting Senior Director of Development for Scholarships and Fellowships Jennifer Bertram at bertram9@msu.edu or by calling (517) 432-7330.