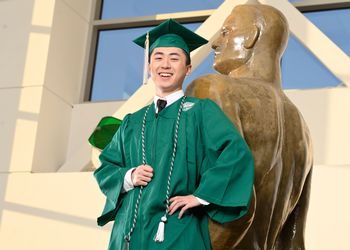 When Jiahao She, ’19, graduated from Michigan State University last spring, he proudly wore a green and white philanthropy cord. The honor was bestowed on graduating seniors who gave at least $50 to MSU during that school year.

“Give Green Day is a special holiday at MSU,” he said. “It’s a day where all Spartans participate to make the MSU community a better place.” She was one of 1,411 graduating seniors who combined to give $72,906.68 last year.

She grew up in Chongqing, China, and came to East Lansing partly because he wanted to live in a city with snow. He made the most of his time on campus, working as a student supervisor in training in the Snyder Phillips Cafeteria while juggling his finance major in the Eli Broad College of Business, his theater minor in the College of Arts and Letters and his leadership roles on the Senior Class Council and as a Broad College representative to the Associated Students of MSU. He also ate his way through campus—one of his favorite parts of MSU, he said, was his choice of 10 dining halls.

Today, She is working as an account manager for a marketing firm and as a part-time financial adviser.

And he’s excited for his first Give Green Day as an MSU graduate.

She made his first gift to MSU on Give Green Day last year. It certainly won’t be his last.