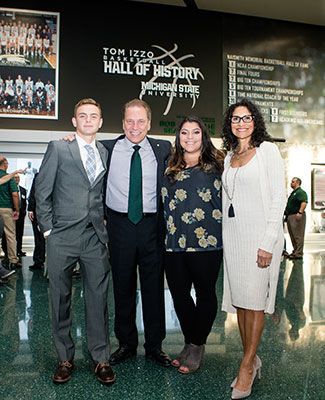 Philanthropy is fueling a transformation of Munn Ice Arena, and along with it, MSU Hockey.

At their June meeting, Michigan State’s Board of Trustees approved an $18.8 million budget for an addition to the south entrance of Munn. The move followed a fundraising effort that secured more than $10 million in support for the project.

Lead donors include Men’s Basketball Head Coach Tom Izzo and his family who made a $1.1 million gift, with a portion for the Spartan Marching Band and academic services.

“Our basketball program is so very fortunate to have the support of many individuals and donors who understand how important facilities and scholarships are to recruiting and competing for championships,” Tom says. “I’ve been going to hockey games since I came to Michigan State, and those games are some of my greatest memories. The Spartan family is fortunate to have Danton Cole leading the hockey program and we (Lupe and I) are grateful to be able to support our hockey program that is about to take off.”

“This facility is a game-changer for us, and I could not ask for a more meaningful endorsement than to have Coach Izzo and Lupe supporting our program,” says Cole.

MSU Hockey Head Coach Danton Cole says he is humbled by the Izzos’ generosity. “This facility is a game-changer for us, and I could not ask for a more meaningful endorsement than to have Coach Izzo and Lupe supporting our program,” he says.

Dedicated in 1974 as the home for MSU Hockey, Munn was built into a natural slope that gives it the impression of being underground. Hidden exterior walls and an angular roof belie the true scale of the facility. Once inside, the massive arena comes as a surprise that offers excellent sight lines of the ice all around.

Over the years, strategic investments from the Athletics Department kept Munn on the list of the finest hockey facilities. At the end of the 2014 season, aging ice-making equipment and the building’s heating and cooling system were replaced. More recently, new video boards and scoreboards, seating, club boxes and lighting significantly upscaled the game experience for fans.

The upcoming renovations will turn to the external portion of Munn, providing a “front door” that will project an inviting and positive image for the hockey program. Additionally, an expanded concourse will connect a Hall of Honor—highlighting individual and team accomplishments—to an enhanced pro/apparel shop.

Meanwhile, much-needed improvements inside will help attract elite student-athletes, including an updated locker room, shooting bays and a players’ lounge. A state-of-the-art weight room will mean hockey players no longer have to trek down the street to the football building to train.

The gift from the Izzos helped kick off the renovations that officially began last month and are expected to be completed by December 2020.

It is the second gift of more than $1 million for the Izzos since 2011. They also donated $500,000 for the media center in their name as part of the North End Zone expansion to Spartan Stadium in 2014.

“Tom and Lupe are both extraordinary individuals who epitomize what it means to be team players,” MSU Executive Associate AD for Development Chuck Sleeper says. “It is unique to find a head coach who contributes to a program other than his or her own and that’s what makes Tom so special. The entire Izzo family, just like many of our donors, cares deeply about the success of Michigan State.”

LEARN MORE about supporting MSU Athletics through the Spartan Fund, including the Munn Ice Arena expansion, at SpartanFund.net