Making "Living with IBD" a Thing of the Past

"Our goal is finding a progressive treatment...one that could repair the damage that has already been done and eliminate the need for surgery." 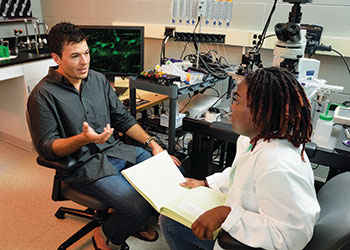 For Dr. Brian Gulbransen—a researcher in MSU’s neuroscience program and Department of Physiology—understanding the actions of the enteric nervous system, especially as they apply to Crohn’s and other inflammatory bowel diseases, is a daily pursuit.

Though these diseases are treatable, current treatments are only temporary. They lose effectiveness over time and bring along a list of potentially dangerous side effects.  The research being done in Gulbransen’s lab, bolstered by a recent $350,000 Senior Research Award grant from the Crohn’s and Colitis Foundation of America (CCFA), has the potential to change that.

The enteric nervous system is the boss of all things gastrointestinal, and all of the systems associated with digestion, absorption of nutrients, and expulsion of waste answer to it. With a neuron count that outnumbers even that of the spinal cord, it is often referred to as “the second brain,” or “the brain of the gut.” When neurons in this “second brain” die as a result of inflammatory bowel diseases, sections of the gut can suffer permanent damage.

Gulbransen’s work focuses on those tiny, essential building blocks of the enteric nervous system: the neurons, and the glial cells that surround them.

After discovering that the neurons’ support cells, the glial cells, can “eavesdrop” on the messages the neurons send to one another, Gulbransen surmised that the subsequent behavior of the glial cells might play a role in neuron death. If that is the case, new treatments could be developed that target the glial cells.

“Our goal is finding progressive treatment. One that would control the glial cells, reverse the bad signals they’re sending to the neurons and repair the damage that has already been done,” Gulbransen says. “Paired with an anti-inflammatory, treatment like this could eliminate the need for surgery, which is very good.”

The Crohn’s and Colitis Foundation of America is a non-profit, volunteer-driven organization committed to finding a cure for Crohn’s, ulcerative colitis, and other inflammatory bowel diseases by supporting research efforts like Gulbransen’s.

The CCFA’s Senior Research Award is for established researchers who seek funding to gather enough critical preliminary data to become competitive for funding from the government, such as through the National Institutes of Health.

“NIH funding is hard to get,” Gulbransen says, “and it isn’t usually enough to completely run a lab, which is why funding from other places—like the CCFA—is absolutely necessary at every stage of research.”

“Their support, at various points in my career, has allowed me to go down this whole line of work, from the beginning to where I am now,” he added. Gulbransen’s earlier work as a postdoctoral fellow at the University of Calgary was supported in part by a grant from the Crohn’s and Colitis Foundation of Canada.

In addition to its mission to find a cure, the Crohn’s and Colitis Foundation, which has more than 40 volunteer chapters nationwide, provides resources and support to the more than 1.4 million individuals of all ages, in the United States alone, living with inflammatory bowel diseases.