“Michigan State has played a large role in both of our lives and we are honored to support the university." 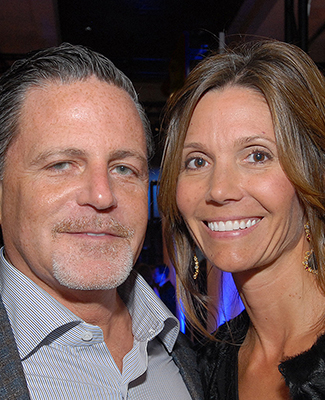 “Michigan State has played a large role in both of our lives and we are honored to support the university."

On October 26, 2016, Michigan State University alumni Dan and Jennifer Gilbert announced a $15 million donation from their family foundation to impact and elevate student success and one of the nation’s elite basketball programs.

The Gilberts’ gift will support a new addition and renovation of the Breslin Center at MSU that will enhance the fan experience for the more than 500,000 people who attend basketball games and other events there each year.

The gift also will support two MSU programs; the Detroit Scholars Program (DSP) and the Resource Center for Persons with Disabilities (RCPD).

The DSP provides academic support and scholarships for Detroit-based students attending MSU, including those who are the first in their families to attend college or who have come from academically disadvantaged backgrounds. Michigan State enrolled 109 Detroit Promise Scholars in the 2016-17 academic year, the inaugural year for the program. The Gilberts’ gift will provide funding to enhance counseling and support services to ensure a high level of retention and improve the chances of success for these students from Detroit.

The RCPD works with nearly 2,000 students each year at MSU to find solutions to the challenges that people with disabilities face in higher education, making the campus accessible to those who are visually impaired or deaf, have mobility challenges, learning disabilities, chronic health or mental health conditions or are on the autism spectrum.

“Michigan State has played a large role in both of our lives and we are honored to support the university. Coach Izzo and Mark Hollis have built Spartan basketball into one of the nation’s premier programs,” said Dan Gilbert. “Additionally, it is important that students of all backgrounds, including young Detroiters, realize their maximum potential and are exposed to the opportunities that higher education provides.”

The donation is one of the largest in MSU’s Empower Extraordinary campaign, which has raised more than $1.26 billion since 2011 to support global problem-solving research, endowed faculty positions, enhanced facilities and student opportunities.

“The Gilberts’ gift reflects their understanding of MSU’s deep commitment to being accessible to all deserving students. Their generosity will help us continue to build and maintain a vibrant campus community and also allow our athletic programs to train and compete at the highest level,” said MSU President Lou Anna K. Simon. “We are so grateful to Dan and Jennifer for their support – the impact of which will extend far beyond MSU, to all of the people who come from far and wide to visit the Breslin Center or to become a Spartan.”

The Breslin Center addition – in all a $20 million project – involves construction of a new box office, the Tom Izzo Hall of History and, for the student-athletes and coaches of the men’s and women’s basketball teams, the addition of the Draymond Green strength and conditioning center, a hydration station, lounges for players and recruits, and an alumni locker room.

“Dan and Jennifer are great Spartans and their gift is a perfect example of leaders making an investment that will transform MSU,” said MSU Director of Athletics Mark Hollis. “Decades down the road, we will look back at this campaign, at this time in our history and be so grateful to people like the Gilberts for helping us create a vision for what MSU can be. It doesn’t happen without significant private support and we are so grateful.”

Hollis adds that, upon completion, the upgrades to the Breslin Center will make it one of the nation’s finest basketball complexes and play a key role in recruiting future student-athletes.

Dan Gilbert, a graduate of the College of Communication Arts and Sciences, is founder and chairman of Quicken Loans Inc., the nation’s second-largest mortgage lender. He is also founder and chairman of Rock Ventures LLC and majority owner of the 2016 NBA Champion Cleveland Cavaliers. Gilbert moved his family of companies to downtown Detroit in 2010, creating thousands of new jobs, and has invested more than $2.2 billion to purchase and renovate more than 95 properties in the city. His companies employ nearly 30,000 team members, 17,000 of them located in downtown Detroit.

Jennifer Gilbert graduated from the former MSU College of Human Ecology in 1990 with a bachelor’s degree in interior design. She has built multiple successful companies in the area of home and interior design, the most recent of which is Amber Engine, where Jennifer is founder and CEO. The Detroit-based B2B technology start-up focuses on transforming the inefficiencies for manufacturers and designers in the home furnishings and interior décor industry.