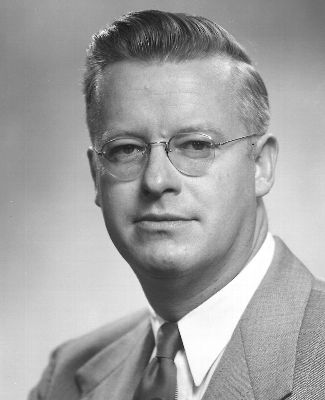 John R. Daily knew very early on he wanted to study forestry, but when he began forestry classes at MSU in 1947, he did not take to them right away. It wasn’t until he discovered the Park Management and Municipal Forestry major and was introduced to Professor Arthur Wilcox that things began to take shape.

Professor Wilcox (pictured in his faculty directory photo above, courtesy MSU Archives) provided not only mentorship and education, but also a meaningful friendship to John over the years—and later to John’s son as well. John recently created an endowed fund to support student experiential learning in Community and Urban Forestry at MSU to memorialize Professor Wilcox’s teaching career and the impact he made on John and his family.

After completing his undergraduate degree, John served in the Korean War, then returned to MSU to attend graduate school. Though the Park Management major had been moved from the Department of Forestry to the Land and Water Conservation Department, he was happy to see it remained under Art Wilcox’s direction.

Years later, in 1964, Dr. Wilcox reached out to John with a job opportunity. He relayed that he would be leaving his role as the Director of the Akron Metro Park District in Ohio and suggested John apply to be his successor. Crediting Dr. Wilcox’s strong recommendation, John was selected to become the new director, where he served for 30 years until his retirement in 1995.

When John’s son began his studies at Colorado State University, John was delighted to learn he would be studying under Dr. Wilcox, his professor, mentor and friend.

Art Wilcox died in 2005, but his legacy at MSU lives on through his students and now an endowment to help future Spartans as well.

LEARN MORE about supporting the College of Agriculture and Natural Resources by contacting Senior Director of Development Tami Baumann at bauman13@msu.edu or by calling (517) 355-0284.