Peter and Joanne McPherson create new endowed fund for the program Joanne helped found in its ongoing mission to provide shelter and support while seeking to end domestic violence. 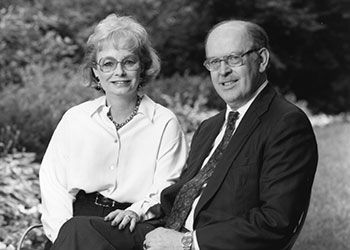 Former First Lady Joanne McPherson had not even officially arrived on MSU’s campus when she was inspired to take action that would have a life-changing impact on thousands of Spartans and their families.

Being driven from the Lansing airport to Cowles House by a friendly MSU police officer, she took the opportunity to learn more about what might be needed to improve the lives of MSU students. Something he said really struck her: there was not a safe place for students experiencing domestic violence to go.

Starting from that summer night in 1993, Joanne would spend the better part of the next year working diligently to change that. Thanks to her leadership, MSU Safe Place became the first—and still the only—university-based shelter where students, staff, faculty and their partners experiencing abusive relationships can find refuge and support. The program offers temporary, emergency shelter for survivors and their children, as well as advocacy, support and counseling services while working to end stalking and interpersonal violence through public awareness and community education.

“I learned there were certainly needs in the community,” she recalls, “but also that there were many resources that could be pulled together for solutions.”

She found herself doing things she had never done before: creating a task force comprised of campus and community members; obtaining advice from social workers, lawyers and doctors; fundraising and grant writing; public speaking; and hiring a director. “So many people helped,” Joanne says, including the campus police, campus housing, MSU CATA Transportation, student organizations and the City of East Lansing. Several sororities went from door to door to obtain cash gifts and in-kind contributions. Now deceased professor Milt Muelder, the MSU Federal Credit Union and others contributed financially. Joanne’s husband, former MSU President M. Peter McPherson, threw his strong support behind the project, which helped open doors, but he is quick to credit Joanne with all the “real” work.

“She is a doer and a multi-tasker” says Peter. “She pulled people together to solve all manner of difficult issues—from a process to adjust schedules so students would not be in the same classes as their abusers, to ensuring a secret location for the shelter and complete confidentiality. And, of course, she also expertly argued the case to me every night.”

Fast forward to today and the McPhersons are still leading. Recently, the couple made a $50,000 challenge gift to create an endowment to support MSU Safe Place, which they hope will double in size as other donors are inspired to contribute. The endowment commemorates the 25th anniversary of MSU Safe Place and honors both Joanne and founding director Holly Rosen, who is still very much on the job.

“Holly was key for creating a sustainable program that has now stood the test of time,” says Joanne. “She had just the right mix of knowledge and know-how, commitment and passion.”

Holly is just as appreciative of Joanne’s role.

“Her connections, endless energy, vision and firm insistence that these services be provided got MSU Safe Place up and running barely a year into her tenure as first lady,” she says. “I am so appreciative for that and for the ongoing commitment from both the McPhersons.”

Enthusiastic support from the community has sustained MSU Safe Place from the beginning, allowing all services to be offered free of charge.

A 5K “Race for the Place” has raised thousands of dollars every spring since 1994. COVID-19 prevented the event from happening this year, but many sponsors and participants donated all the same to raise more than $22,000.

Over the years, several endowments have been created to support Safe Place programming, including one to support advocacy work made by MSU retiree and Safe Place volunteer Sashi Reddy and her husband C.A., an MSU professor.

LEARN MORE about how you can support MSU Safe Place on an ongoing basis, as well as to respond to this current $50,000 endowment match challenge initiated by the McPhersons, by contacting Executive Director for Constituency Programs Vivian Leung at leungv@msu.edu or by calling (517) 884-7597.