A Continuation of Innovation

John and Eva Cillag keep their passion for innovation in science and engineering alive through an endowed chair position in engineering. 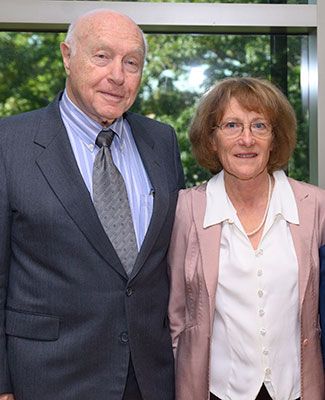 A Continuation of Innovation

John and Eva Cillag keep their passion for innovation in science and engineering alive through an endowed chair position in engineering.

When John Cillag, ’62 (Engineering), came to Michigan State to study engineering, he didn’t just feel the everyday freedom of a 19-year-old away from home for the first time.

The freedom he felt was much more profound. He was born to a Hungarian-Jewish family in Paris, France. He’d survived the Holocaust in France then, after moving to Hungary with his mother, barely escaped the deportations by hiding in the countryside there. He lost more than 30 of his relatives to the brutality of the Holocaust and World War II. He’d seen and experienced the oppression of a communist government, and he knew that, if he’d stayed in Hungary, he would’ve had very little opportunity to go to university, earn a degree, choose a career he wanted. The 1956 Hungarian revolution gave him the opportunity to escape and start his productive life—and the place to do that was America. He wanted to earn an engineering degree, and upon arrival, he was admitted to a liberal arts college where he learned English, enabling him to move on to an engineering program.

He also wanted to continue playing ice hockey, and MSU had a pretty good program at the time, so that’s what ultimately brought him to campus. He earned a full scholarship, joined the junior hockey team, became a member of Triangle Fraternity and devoted his studies to engineering.

He also made time to go to basketball games, football games, music performances and, of course, Coral Gables, to fully round out his Spartan experience and, in all honesty, to fully embrace the American experience, too.

In fact, in a 2016 interview for the Memory Project, a multimedia archive being developed to document the emigration of Hungarians to America, John said, “I decided early in the game that I came to America to become American as much as I could.” It’s safe to say, he did just that at MSU.

He graduated in 1962. With help from a placement bureau for recent graduates, he got a job with DuPont and began a long, successful career working as an engineer. Early on, his talent for innovation was recognized and his rank rapidly grew within DuPont, where he eventually became the head representative of a department in the Far East. As an expert in the growing high-tech electronic materials field, in 1979 he established his own company, which was later acquired by an international company. He remained there and successfully headed a division until retirement.

By the early 1980s, Eva Gero was already an accomplished immunologist in Hungary, then in The Netherlands, when her oncological research experience earned her an invitation to come stateside. She joined a start-up in Pennsylvania, which grew into a large pharmaceutical company where she materially contributed to the development of novel diagnostic assays, primarily for the management of cancer.

Eva and John met in 1984 and bonded over their shared cultural roots—but probably also their parallel paths in careers that were heavy on technology, scientific research and innovation. With Eva’s then 9-year-old son, Andras, they became a happy family. Andras, under John’s guidance, finished engineering at Cornell then earned a graduate degree in computer science at UC Berkeley. He became an accomplished scientist, and John and Eva are happy to have three grandchildren.

For two such highly successful and motivated people, it’s only natural that these shared interests wouldn’t simply “go away” once they retired. And from their sun-drenched home in Berkeley, California—where they have a view of the Golden Gate Bridge from their patio and, John is happy to report, “No snow and no freezing. Never freezing.”—they’ve found a way to stay engaged with research and innovation: by supporting endowed faculty at Michigan State.

Michigan State put me on a track that led to my beloved career, my job and to my entire productive adult life. After I retired, I wanted to give back, and I wanted to provide something that would be left after me. And after meeting with Dean Kempel, we decided the best way to do that was to have an endowed position in Engineering.

As they started to explore the idea, both John and Eva were impressed with the way the two fields they were most passionate about—high-tech medical research and engineering—were being melded through cooperation between the colleges on campus.

But here’s the thing about growing up outside the United States, about having a career that takes you all over the world, about doing work in vast, widely applicable fields like technology or medicine: you realize how big all of it is, and how critical it is to make and foster connections, not just between disciplines, but across borders and oceans and cultures—because everybody has something important to bring to the table, and goodwill among them is invaluable.

So for John and Eva, their generous gift to create the Cillag Endowed Chair in Science and Engineering was about much more than simply enabling an MSU researcher to do great work on campus.

It was about enabling an MSU researcher with a history of international cooperation to continue that cooperation and help Michigan State build connections to scientists, researchers and people in high-technology fields abroad.

“Because of my international experience and background, I’m aware of the many bright people in the Israeli scientific community and the great number of high-tech inventions that Israel has offered to the world. MSU already has a Jewish Studies program that focuses on history and humanities, so I was interested in helping MSU build bridges for scientific cooperation with Israel, too.”

John Cillag’s heritage inspired him to advance international cooperation and to assist in opening channels for mutual learning and shared innovation in enriching each other’s achievements.

That’s one reason MSU chose Dr. Arun Ross to be the inaugural John and Eva Cillag Endowed Chair in Science and Engineering. Ross runs the iPRoBe lab within the College of Engineering, where he and his team are working on technology that can be used to identify and classify characteristics, identify trends and find patterns in the area of biometrics. It is a technology field that employs many researchers at companies and universities in Israel.

“It is gaining wider and wider acceptance,” John says of the field of biometrics. “Both countries will benefit from his work, and it’s a satisfying feeling to be able to engage and enrich this connection, and find ways that we can help increase the cooperation.”

LEARN MORE about supporting the College of Engineering by contacting Senior Director of Development Stephen Bates at batesst@msu.edu or by calling (517) 355-9339.