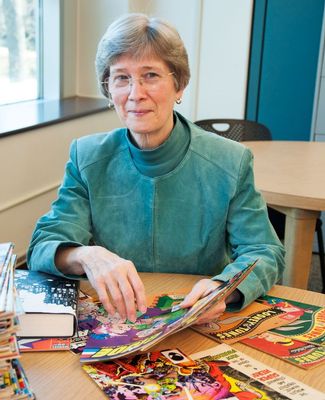 Reading comics was something Dr. Sarah Newman only did as a child until her husband Dr. Richard (Rick) Mark Newman reintroduced her to them as an adult. Rick, an M.D. and a neuroscientist like his wife, relied on comic books during the eight years he lived with ALS. “He couldn’t do anything but read,” Sarah says. “He was totally paralyzed, but he could move his eyes.”

As a childhood fan of Conan the Barbarian, Rick began reading Cerebus the Aardvark, a loose parody of Conan which evolved into a broad exploration of the artistic and literary reach of comic art. Each week, Sarah stopped at the comic store to pick up the latest issues of this and other favorite titles for Rick.

During his years of paralysis, Rick was “bored to tears” and always looking for ways to exercise his intellect. To him, comics brought entertainment and intellectual stimulus in equal measure. He had an appreciation for the artwork and collected a good deal of memorabilia from the Cerebus series before his death in 1987.

Memories of this time prompted Dr. Newman to pledge a $280,000 gift in support of the MSU Comic Art Collection. The Richard Mark Newman, M.D., Endowment for Comic Art, when fully funded, will ensure continued preservation and access to this beloved collection.

Since its creation in the 1970s, the comic book collection in MSU’s Special Collections library has grown to be one of the largest in the world, with more than 200,000 comics dating back as far as the 1840s. The collection is part of a larger movement by MSU to preserve pop culture artifacts and make the study of pop culture in academia, well, popular, because it turns out it’s not just “kid stuff”—a fact the Newmans knew well.

For more information on making a gift to MSU Libraries, contact Director of Development Seth Martin at marti981@msu.edu or call (517) 884-6446.