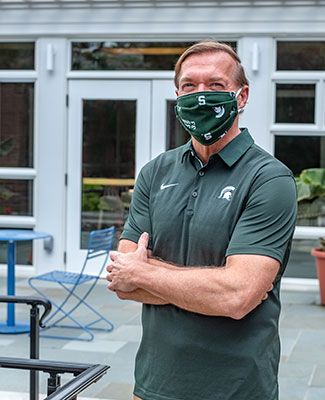 An invitation to Cowles House is a special honor for any Spartan or friend of MSU.

It is the university’s most intimate venue for celebrating student and faculty achievement. Venerated for its age and history—originally built in 1857 to house MSU’s first faculty—as well as its location tucked into the beauty of the north campus park, Cowles House has long been a center of campus hospitality.

Stalwart Cowles House hosts more than 150 events each year, welcoming MSU’s most distinguished guests to campus and marking some of MSU’s most significant milestones, while also serving as the official residence for MSU’s president. Yet, major upgrades and repairs were sorely needed.

Recently, thanks to the generosity and partnership of many stakeholders, Cowles House has been transformed to become fully accessible, more accommodating, and user-friendly—ready for the next chapters in its long MSU history.

Every construction project at MSU—whether a new building or a renovation of an existing one—should be considered as a 100-year addition to the campus, simultaneously respectful of MSU’s legacy while preparing for its future. Both companies have proven track records with building, preserving and modernizing MSU’s most iconic structures and both made significant gifts to the project, along with several sub trades. Several additional collaborations ensured the project achieved its full potential.

Herman Miller Company donated furnishings that honor Michigan’s role in the mid-century modern movement and returned Cowles House to the style Clifton and Dolores Wharton remember from their tenure there.

The Musser family, former owners of the Grand Hotel on Mackinac Island, generously lent their design expertise to the private areas of the home back in the 1980s and Dan Musser III followed in his family’s tradition, with the assistance of renowned interior designer Carlton Varney.

A final, uniquely MSU touch is a mural that honors donors constructed by MSU Shadows from trees felled on campus.

LEARN MORE about supporting the Cowles House project by contacting Senior Regional Director of Development Pam Serwa at serwap@msu.edu or by calling (517) 884-1050.