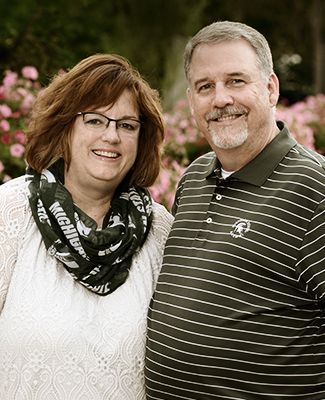 Anybody who knows anything about the Spartan Marching Band will tell you that it makes families.

Not just in the figurative sense, by fostering camaraderie among its members, but in the literal sense, like in the case of Heather and Bradley Halls, who met as band kids in 1984, and now have band kids of their own: Emily, a clarinetist who played alto saxophone in the band and graduated in May, and Cameron, a percussionist, currently a senior. Both chose music education as their major.

The Halls have always given back to MSU, but with two kids in the band at the same time, they wanted to support their Spartan band family and their biological family—and find a way to be involved in the kids’ college careers without hampering their newfound independence.

So they decided to get the family together for a pre-season pancake breakfast.

“The kids work so hard in pre-season, practicing all day and late into the evening,” Heather says. “We wanted to do something nice for them, while creating an opportunity for parents to support the band, connect with one another and see how their kids are doing in those first few weeks away from home.”

She planned the first breakfast with a group of fellow band alumni—old friends of hers and Brad’s who, like them, had kids in the band.

“After the first breakfast, so many other parents wanted to get involved, it became a new pre-season tradition,” Heather says.

As a result, the Halls’ band family has grown. So, too, has the collective support for the band and the College of Music.

Every year, through the generosity of band family donors, the event raises funds for the SMB Jacket Fund, which helps offset the cost of the traditional green and white jackets bestowed on first-year band members. 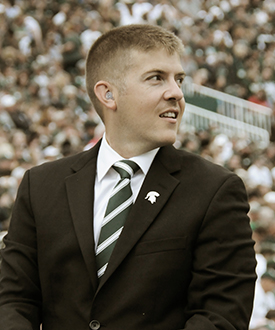 The Spartan Marching Band couldn’t be all that it is without the support of annual donors. But it is especially meaningful when parents—who typically have already invested so much in their students’ education—are among those who step up to help us sustain our tradition of excellence. The Halls are one of countless families who have given back to our organization. The students and I are incredibly thankful for Heather and Brad, and to all who continue to support the SMB.

The jackets hold a special place in the Halls’ hearts because of what they symbolize.

“You can be anywhere on campus and see one of those band jackets and know that the person wearing it worked really hard to earn that privilege,” Heather says. “It's an instant connection to your band family, wherever you may be.”

“And now it’s a really special intergenerational thing that we have in common with our kids,” Brad adds. The music connection in the Halls family runs deep: Heather’s parents were both music majors and her father was also a member of the SMB.