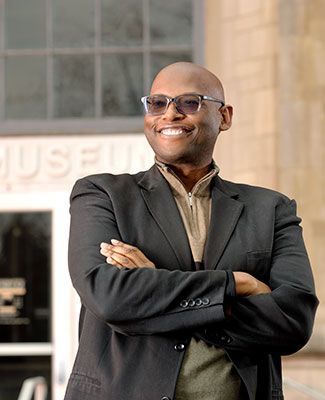 Do you ever walk through a museum and think about the people behind the scenes—the ones who manage the collection, facilitate the exhibits, shape the narrative?

Who are they? And what makes them qualified to decide which pieces of art or history or science are important enough to go on display as a representation of our culture?

For 50 years, Val Berryman was one of those people at the MSU Museum. Berryman, who passed away in 2013, was the museum’s curator of history, and is remembered for his extensive knowledge of campus history and lore; his “Memories of MSU” exhibit to celebrate the university’s Sesquicentennial; and, most notably, his annual Christmas exhibit, replete with holiday artifacts from around the world.

Now, thanks to a bequest from Berryman’s estate and contributions from his friends and associates, the endowed Val Berryman Curator of History position has been established to carry on his legacy—and take it in even more exciting directions.

Last fall, it was announced that Dr. Julian Chambliss was the man for the job.

Chambliss joined MSU in 2018 as a professor of English with a joint appointment in the Department of History. He is also a core faculty member in the Consortium for Critical Diversity in Digital Age Research (CEDAR). He was selected to be the inaugural Berryman Curator of History this fall and is excited to help shape the future of the museum.

Chambliss admits that he, like Berryman, approaches his work in a way that some might find surprising. A self-described “historian that deals in comics, and an English professor that doesn’t focus on the novels,” Chambliss has spent his career studying race, community and identity in real and imagined urban landscapes in the United States.

Chambliss’s scholarship examines imagined spaces, but allows for him to move from comics and superheroes to explorations of historic black community and black liberation. Ultimately, he sees the connection between imagining freedom as a speculative practice that places imagined places in dialogue with real spaces.

In the classroom, Chambliss takes his students with him into these worlds. Now, in the MSU Museum, Chambliss would like to create exhibits that bring the broader community along, too. With the help of funding through the Berryman curatorship, he would like to make the museum a destination for collaborations with artists and scholars whose work will bring nuance and context to physical artifacts.

“The museum is one of the oldest institutions on campus, and without this endowment, I wouldn’t be there,” he says. “But now that I am, I see it as an interesting challenge to figure out how we’re going to use my curatorship to get more engagement. The museum is a safe educational space for adults and for kids, so we’re always thinking about what the educational component is going to be, and wondering, ‘what are people going to take away from this?’”

“Val Berryman casts a long shadow. He was an eclectic curator, and I relate to that, as I, too, am a very interdisciplinary, think-outside-the-box kind of person. As the Berryman Curator, I will work, as Dr. Berryman did, to make the institution of the MSU Museum even more responsive to the everyday.”