The Anil K. and Nandita K. Jain Endowed Professorship will strengthen the Department of Computer Science and Engineering 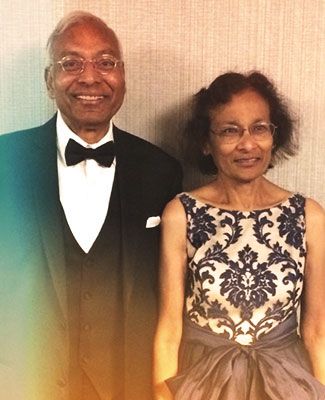 The Anil K. and Nandita K. Jain Endowed Professorship will strengthen the Department of Computer Science and Engineering

Michigan State University will further advance its proficiency and renowned expertise in biometrics with an endowed professorship, made possible by multiple donors whose gifts spanning a number of years have totaled $1 million.

The Anil K. and Nandita K. Jain Endowed Professorship will strengthen the Department of Computer Science and Engineering and its ability to recruit and retain faculty for teaching and research in the specialized fields of pattern recognition, computer vision and machine learning.

Jain is currently serving on a committee of The National Academies of Sciences, Engineering and Medicine as it initiates a study on the positive use and potential misuse of facial recognition technologies in the United States.

The endowed fund was made possible from new and previous gifts to the College of Engineering, many made in honor of Jain, combined with approved modifications of a 2015 gift made anonymously by a visiting scholar who once worked in Jain’s laboratory. Anil and Nandita Jain and their three daughters also made a substantial contribution toward this endowment.

“Professor Anil Jain represents faculty excellence at Michigan State University and has a tremendous reputation as a biometrics expert,” said President Samuel L. Stanley Jr., M.D. “We are honored to be able to create this endowed professorship, which is a critical investment in support of his groundbreaking work and creates a lasting tribute to his legacy as faculty leader.”

Leo Kempel, dean of the MSU College of Engineering, said the new fund will help the college support faculty who make extraordinary impacts on computer science education and research.

“The generous support of donors is critical in attracting and retaining the best faculty members, especially in the highly competitive environment of computer science and engineering,” Kempel said. “This particular fund is especially gratifying as it recognizes the generational impact made by Anil and Nandita to the department, college, university and field of computer science.”

Abdol Esfahanian, professor and chair of the Department of Computer Science and Engineering, said, “The contribution of Anil Jain to the field of computer science is beyond measure. Similarly, his contribution to the department, the college and the university is incalculable. The establishment of this fund, made possible in part through the generosity of Anil and Nandita, will be instrumental in hiring faculty members who will strive to become the Anil Jains of tomorrow.”

JC Mao (Ph.D. ’94), vice president of engineering at Google Assistant, said he was fortunate to receive a high-quality education and rigorous training at MSU, under Jain’s supervision.

“Professor Jain has an unparalleled ability to identify research topics that are both fundamental and practical in the fields of pattern recognition, computer vision and machine learning, and to connect research work with the industry,” Mao said. “He's offered me invaluable advice and guidance and provided many opportunities for me to stretch myself, both throughout my time at MSU and thereafter.

“The education I got from MSU was my biggest asset when I left MSU, and it still is today. It has had a profound impact on my career and life,” Mao continued. “This endowed professorship honoring Professor Jain and his wife will further advance teaching and research at MSU and positively impact the careers and lives of many students in the years to come.”

He has received numerous awards, including a Guggenheim fellowship, the Humboldt Research award, a Fulbright fellowship, the IEEE Computer Society Technical Achievement award (2003), the IEEE W. Wallace McDowell award (2007), the IAPR King-Sun Fu Prize (2008) and the ICDM  Research Contribution Award (2008). He holds six patents and is the author of several books. For transferring several technologies on face and fingerprint recognition, developed at MSU, to major players in biometric industry, Jain was named the 2014 innovator of the year at MSU.